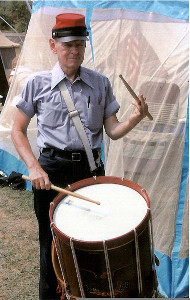 Bobby Thompson was one of the most influential rudimental drumming teacher of the 20th Century.

If anyone viewing this page has biographical information on Bobby, please forward it us at: info@usard.org

“He was a drum instructor for the St. Andrews Bridgemen back in the 60s, of which I was a member. I played horn, but I always dreamt of being part of the drumline taught by Bobby! He was that influential on me as a boy. The precision he taught and the sincerity in which he went about his business is indelibly implanted on my mind! I remember it like it was yesterday! Clem Burke of the rock group Blondie was one of his students, and a second rate drummer until Bobby got a hold of him! I personally watched the progression and was in awe! To this day, when I see a drummer of any kind,I think of Bobby Thompson and how great a man I was in the presence of. Hats off to Bobby and his legacy!”