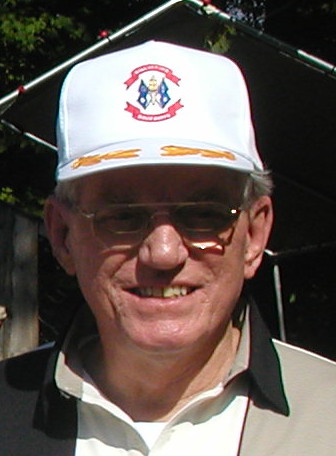 As a child, a very young Donald performed in local pubs in his dad’s dance band. His drum corps drumming career started with the Joseph B. Garrity Post American Legion in 1938, followed by his playing with the Phoebe Hearst. Mr. Friesing went on to join the Raymond A. Gabarina Drum Corps (which became the N.Y. Skyliners) and was one of the infamous ‘Original’ 8 Skyliners’ Snare Drummers.  One of Mr. Friesing’s highlights of his performing days was playing snare drum in the Legendary Sons of Liberty.  Sadly, Mr. Friesing was the last living member of the ‘Original 8’ Skyliners’ snares and Sons of Liberty.

Mr. Friesing excelled as an Arranger and Drum Instructor.  His drum parts were ahead of his time.  His style relied on tasty syncopation between Snares, Tenors, Cymbals and Bass, thoughtful and unique use of drum voicings to support the horn scores, and his creative use of expression.  As a teacher Mr. Friesing was one of the best in the history of Drum Corps.  He was a master, teaching the Les Parks/Bobby Thompson left hand grip, and his teaching style was a mix of Patience, being Demanding, Kindness, and getting quality results.   His students adored him, and they excelled.  Notably, Mr. Friesing arranged and instructed The Babylon Islanders, Our Lady of Loreto, Connecticut Hurricanes, Ballantine Brewers, St. Rocco’s of NJ, St. Joseph Patron, Washington Carver, St. Ignatius, and the Blue Hornets. Mr. Friesing was a percussion judge for the Northeastern Circuit, the Long Island Circuit, Greater New York, and Eastern States Judging Associations.

Mr. Friesing was an accomplished Organist.  He just ‘loved’ to perform for family and friends.          I can say firsthand that in recent times, the legendary WDCHOF’ers Tommy Martin, John Oddo, along with myself (Chet Doboe), would visit Mr. Friesing over the years, and he would sit at his console concert organ (with bass pedals) and just serenade us with songs from the Great American Song Book. He was simply awesome.   I do believe that his keyboard experience impacted greatly on the musicality of his drumline arranging.

At age 92, Mr. Friesing’s last public drumming performance was at the Drumming For Our Veterans Benefit Concert on Long Island.  He performed a collage from drum solos that he wrote over the years, and his performance was met with a thunderous standing ovation from a sold-out crowd. It was a truly magical moment.

As a friend and student to my mentor, I am most proud to know that throughout Mr. Friesing’s Drum Corps Career, he had a reputation of being a ‘Real Gentleman’.  He respected everyone and was kind and extremely talented.   He made such a difference in people’s lives. And for that I and many are grateful.  Mr. Friesing, Rest in Peace.   The Great Drumline in Heaven gained another Great One!