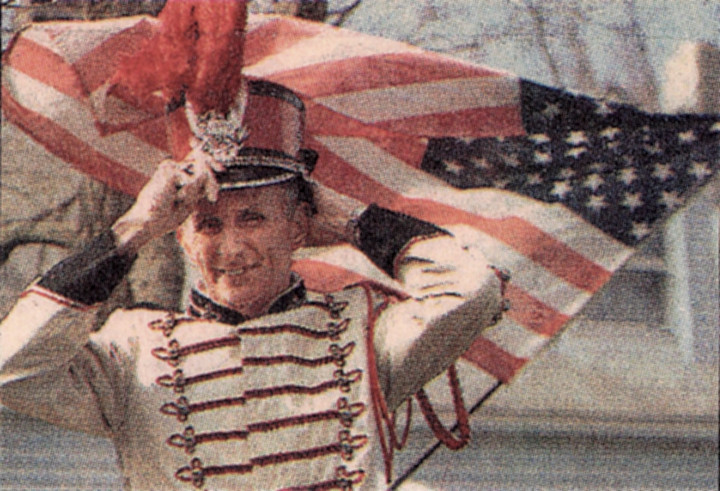 James Gaboardi
Dec 05, 1922 – Aug 23, 2017
James Gaboardi, 89, passed away peacefully at Bethel Health Care on August 22, 2017 with his family by his side. James born to Louis and Cecilia Gaboardi was a lifetime Danbury resident. Jim served in the United States Navy, was a Danbury Hatter and Letter Carrier for the United States Postal Service for 40 years. Jim’s passion in life, besides his dedication to his family, was his love for the Danbury Drum Corps.

“Our dad joined Danbury Drum Corps in 1944 at the age of 16, walking in with his drum sticks, all ready to join and start lessons. He thought it would be exciting and wasn’t much interested in playing sports.

Unfortunately, there was no room in the drum section and as disappointed as he was, it was close to Memorial Day, so he marched in the color guard for 4 years.

and he played the bells until there was an opening in the drum section. His drum instructor for many years was Earl Sturtze.

He stated he remembers the excitement and frustration in trying to master the 28 rudiments! He was always getting reprimanded by our mom for tapping on the kitchen table during meals!!

My dad played the drums for probably around 58 years. He remembers the competitions so fondly because that is where he met his wife (our mom), Dorothy.

Drum Corps has been the fabric woven into families lives. My parents had everlasting friendships with so many through their association with Drum Corps.

While marching a Columbus Day parade in 1992, our dad suffered a heart attack at the end of the parade, was rushed to Nyack Hospital and was given TPA (1 of the 1st hospitals that was starting to trial its use). How lucky we were for that. From then on, dad continued to march and drum but included cardiac rehab 3 times a week into his life.

After the drum started to get too heavy and he was getting a little older and winded from carrying it, he switched to the color guard once again, so he could continue to march. He marched for 68 years!! When our mom told him that was enough, I know how heartbroken he was. Most times he looked better than we all did at the end! His last parade was on Memorial Day in Danbury, where it all began 68 years before. He carried and the saber and marched with so much pride down Main Street one last time.

He continued to come down to rehearsals weekly and played the drum again on the drum pad but now at the table sitting down.

My brother Kevin thought of a special way to honor my dad’s love of the drum corps and so right after his retirement, an annual award was established called the Jim Gaboardi MVP award. It is voted on strictly by the members for a member who exemplifies the same passion and dedication our dad had for the drum corps. It is in its 5th year and I was blessed to receive the award this last spring. Unfortunately, this was the only awards dinner my dad missed due to his declining health and dementia.

The drum corps played at Maplewood in Stony Hill (our dad’s residency) this past May for all the clients and as it turned out, it was our dads last.

Presently my brother Kevin plays baritone, his son Michael base drum, my husband color guard, my daughter trumpet and myself as drum major. Guess we are still well represented!

I hope this gives you a little picture of my dad and his absolute love of drumming and the Danbury Drum Corps.”