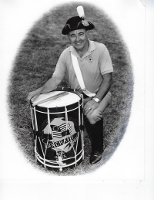 This video of Hugh Quigley performing ‘The Connecticut Halftime’ was pulled from the series of Yahoo links to Lancraft Fife & Drum Corps’ VHS recordings of their 1988, 100th anniversary parade and muster. Hugh was a wonderful drummer and a kind and generous man. I was happy to have known for the short time before his death. Mr. Quigley was a many time winner of the Dan English trophy, which was given to the Connecticut senior individual snare drum champion (the trophy has since been retired). He won many Northeastern individual snare drum championships as well as national titles.

I received the links to the videos from Charlie Terzi. Thanks, Charlie!