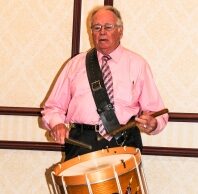 Bill Boerner’s drum and bugle corps career began in 1936 at the age of ten and spanned more than seven decades.

After serving in the United States Navy, he became a charter member of the original Garbarina Skyliners in 1946 and marched with them through 1957. During this time, he served two terms as Corps Director in 1952 – 1953, and again in 1955 – 1957.  With a nucleus of just 16 people – 9 of which were members of the Honor Guard, Bill’s efforts kept the corps from disbanding, and in 1957 launched a successful rebuilding effort, by bringing Lefty Mayer on board. THE REST IS HISTORY, and thanks to those efforts the corps as well as a successful alumni corps both exist today.

For a period spanning nearly 25 years, Bill served as the percussion instructor for eight junior corps and three senior corps.  In 1957, when a Brooklyn neighborhood drum and bugle corps was formed in St. Rocco’s parish church, Bill was asked to teach and write for this new budding corps. He laid the groundwork for the drumline to advance and continue under the instruction of Eric Perrilloux in the fall of 1963.  Bill with George Rodriguez and Jim Doyle started the NYC Chinese Crimson Kings and taught them from the 1950s through the 60s.  He also taught the St. Fidelis Majestic Knights in College Point; Our Lady of Angels “Blue Angels,” in Bay Ridge in the late 60’s, and corps in other locations across New York and New Jersey.

He was an avid rudimental percussionist who could be found for many years at various colonial musters and Jaybird gatherings along the east coast. His activities also included marching with three famous fife and drum corps: The Sons of Liberty alongside Bobby Thompson, Jim Shea, Les Parks, Don Friesing and Nick Attanasio; also, with the Minutemen, the Whiskey Rebellion and the Blue and Grey.   With a love for singing, he was a long time active member of the Skyliners Chorus, and the Skyliners Alumni Association.

Bill continued to drum into his late eighties with the American Patriotic Rudimental Drummers Club and was a member of the Romeo Cadets. In 1999, Bill marched in Dublin, Ireland with many drummers from around the U.S.A., and was thrilled with the experience. A career length almost unmatched, Bill was inducted into the World Drum Corps Hall of fame in 1996 and the Brooklyn Drum Corps Hall of Fame in 2009.

Being a history buff, Bill used to remind everyone at a recent G.A.S. reunion in Gettysburg Pa. that the first casualty of the Civil War was an eleven-year-old drummer. “I taught that kid how to drum” Bill would jokingly remark.

Bill passed a few months ago after contracting pancreatic cancer. He was buried in St. Charles cemetery, with a pair of his favorite Cooperman sticks, naturally.

Click on the Image Below to Play The USARD Tribute to Bill Boerner: