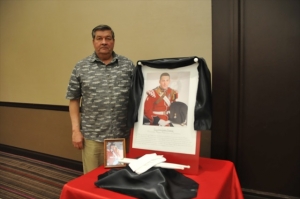 My life in drum corps began on July 4, 1963.  I was sitting on the curb in front of Read’s Drug store watching the Dundalk 4th of July parade.  Before they had even come into view, the sound of the drums told me that something very special was coming.  Then there they were, the Dundalk Cadets!  The girls carrying the flags were shoulder to shoulder and stretched from curb to curb.  Their poise and bearing showed that each one was putting everything she had into doing her absolute best.  Behind the color guard were the Drum Majors; Tony Stitz and Sue Pollock, then came the drum line, then the horns.  I watched, mesmerized by the pageantry, and listened as they played Venus in Blue Jeans.  I watched and listened, transfixed, and before they had completely passed by, I wanted to be part of that group.

Soon after the parade I joined the Dundalk Militares.  The Militares were the Dundalk “B” corps for the Cadets.  In the Militares I learned first to play tenor drum, then snare, under the instruction of Vince Colletti, Sr.  In 1965 I moved up to the “A” Corps, the Cadets.  After a short stint on baritone horn I switched over to snare drum, and played snare for the Cadets for three years under the instruction of Joe Robel.  In 1968 at the age of 21 went to the Yankee Rebels Sr. Drum and Bugle Corps and played tenor drum for two years.  Served as a substitute in 1970 playing snare as needed.  Played snare in the 1970 American Legion National Championship Contest in Portland Oregon.

From 1971 to 1978 I was engaged in judging (percussion) in both parades and field competitions of Majorette and Drum Corps.  Also during this period I was the principal instructor for two drum lines; the Stembridgettes and the Berkshire Debs, and assisted a third corps, the Linthicum
Hi-Lites.

In 1978 I went back into competition playing snare drum with the Westshoremen of Harrisburg Pa. The drum section was under the instruction of John Flowers, assisted by Ric Colletti (Vince’s son, and a corps mate from our days in Dundalk).  Ric took over in 1979 and I played snare when the Westshoremen won the VFW Nationals in New Orleans.  I left the Westshoremen in 1980 and went on hiatus from competing drum corps to concentrate on raising a family. In 1980 I, along with Danny Magsamen, co-instructed the Hanover Lancers who were in the process of reforming.

In 2005 I rejoined the Yankee Rebels (now an alumni corps) and played snare drum with them until they disbanded in August 2010.  For the last three of those years I also served as section leader.   The following year I joined Monumental City Fife and Drum Corps as a snare drummer. Monumental City plays on rope tension drums in the old rudimental style.  They do parades, standstill shows, and perform in ceremonies for many organizations.  In 2010 I joined percussion ensemble called the Middle River Ancients.  The Middle River Ancients is a percussion ensemble emphasizing ancient style (Revolutionary War) drumming technique, and play exclusively on rope tension drums.  The members are all former Yankee Rebels drummers.  The “Ancients” have performed several times for the Freedom Celebration of Trinity Church, and several times for the DCAM at the Hall of Fame Induction Ceremony.  Also in 2010, I joined the Hanover Lancers Sr. Alumni Drum and Bugle Corps as a snare drummer.

At this time I still play actively with Monumental City Fife & Drum Corps, the Middle River Ancients, and the Hanover Lancers.  I presently serve as Vice-President of the Drum Corps Affiliates of Maryland (DCAM).  I am a member of the Yankee Rebels Alumni (YRA) and the United Sates Association of Rudimental Drummers (USARD) and presently serve on the USARD advisory board.