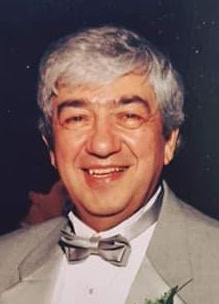 Mr. Iannello passed away peacefully at his home with his family at his side on Friday, September 6, 2019, at age 88.  A Memorial Service will be held at 10 AM on Friday, September 13, at the Holy Trinity Church on 1460 Ridge Road in Webster, N.Y.  Memorials may be directed to Daniel T. Wolfe Trust Fund, 3785 Ontario Center Road, Walworth N.Y. 14568 c/o Willard Scott Funeral Home.

Gaetano “Guy” Iannello, originally from Le Roy, New York was to Western New York drumming what Bobby Thompson was to Central New York or what Les Parks was to New Jersey or what Eric Perrilloux was to the greater metropolitan New York City area.

Starting his drumming involvement as a member of the LeRoy NY high school band, he introduced rudimental style drumming to many drum and bugle corps in Western New York as far back as 1947.  He provided private instruction to several young drum students from area drum corps, of which, many went on to perform, arrange and instruct drum corps on a national level.

He was a member of a Senior drum corps known as the Botts-Fiorito American Legion Post #576 Drum and Bugle Corps of LeRoy N.Y. from 1947 to 1949 and later served in the United States Navy, as the drum section leader, in his spare time, at the Newport, Rhode Island Naval Base Drum and Bugle Corps in 1951.  Upon returning home he was a member of such Senior corps as the Brockport Grenadiers from 1953 to 1954 and the Brockport-Batavia Cavaliers from 1955 to 1957 and the Albion Grenadiers in 1975.  He instructed the Hilton Crusaders from 1958 to 1959 and was part of the early development of the Rochester Crusaders whose progression went from being located in Hilton, Irondequoit and finally Rochester N.Y.

Guy Iannello instructed Colin Campbell who later won high drums at two American Legion Nationals in 1965 and 66.  He also instructed Tom Falzone who won the American Legion Individual Snare Drum title in 1962 and 63.  Guy taught rudimental style drumming to Steve Gadd, who today is one of the most sought-after studio drummers in the world.  Also, in earlier years Mr. Iannello instructed Bill McGrath Jr. who later won high drum honors at two American Legion Championships in 1971 and 72, as well as two RCA Championships in 75 and 76, and instructed the USMC drum corps in 1971.  In Guy’s own words: “My legacy is in the success of my students! Although I don’t take full credit for their success, I am proud to have been associated with them.”

Mr. Iannello’s percussion writing was such that his parts gave a sophistication to the music score with parts fitting like a glove and having great form, style, and musicianship.  Whatever style was required for a march, swing, or jazz style creation, it was done with great taste and contour.  He was a stickler for accuracy and demanded quality in the performance of his writings.  His students always gained from his experience and instruction which came from his drive to deliver excellence.